Turbo was our first dog to finish in the show ring. One of his more spectacular wins was an owner handled BOB over top specials for a five point major at the first supported entry at the MN River Valley Kennel Club in September 1986.

Turbo loved puppies. One of my fondest memories was how he really enjoyed each litter in the household. He would play with them as much as the dam, allowing them to climb all over him. 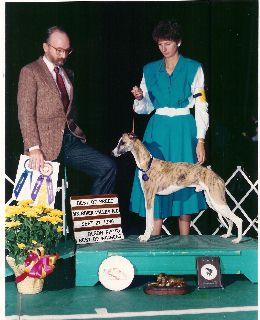 This photo is the BOB at the first MN supported entry. It was the first time I had ever taken a major or shown in the group for Best of Breed.

With Ch Raybar’s A Star is Born, Fch, he was sire of: